Let Go of the Steering Wheel 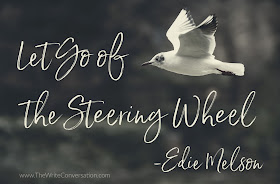 
There are times in my life when making the right decision seems like a no-brainer. Unfortunately those times are few and far between.

For those of you who visit my blog regularly it will come as no surprise that I tend to be a little bit of a control freak. And that character trait often makes it difficult to follow God unconditionally. Let me give you an example.

When our oldest son was just a few months old, my husband and I felt like God was calling us to leave our home in Arkansas, and move to South Carolina. We had no friends or family in the Carolinas, but my husband had a job offer, and there had been some issues with his job in Arkansas that made both of us uncomfortable.

So we began to discuss the possibilities. My husband, ever the engineer, made lists of pros and cons. While I, the creative right-brained one, tried to discover how I felt about the chance of moving. We wrangled over the decision for weeks, but for every pro there was a con, and for every upside there was a corresponding downside. The situation had us stymied.


Then one night, as I drifted off, I was captivated by a dream. I was the passenger in a car, a convertible to be exact, and we were driving a dangerous, winding road that led the side of up a mountain. The road was a tiny two-lane affair, minus guardrails. There were granite cliffs on the mountain side of the road, and a sheer drop to the valley below on the other. I knew about the drop off because the driver kept veering toward the edge of the cliff and I’d have to reach over and yank the steering wheel to keep us from crashing into the valley below. As we hurtled toward the top of the mountain we were up so high I could occasionally see clouds below us.

Finally, I got really irritated because it seemed the higher we got the more often I’d have to pull us back from the edge, and it suddenly occurred to me I didn’t know who was driving. While I kept a cautionary hand on the steering wheel, I risked a quick glance at the face of the person driving.

Even though I couldn’t describe the features to you now, I immediately recognized him…it was Jesus driving the car.


I was immediately mortified and jerked my hand away from the wheel and sure enough, He drove us right off the edge of the mountain. But we didn’t crash. No, instead we were suddenly free, and soaring above the mountain. I don’t remember Him saying anything, but he held tightly to my hand, and I remember Him smile.

At this point I woke, and shook my husband awake to tell him about my dream. He got excited and gave me hug, “That’s it. That’s the answer.”

I was still a little groggy, and I voiced the first thought that came to me. “Okay, but what’s the question?”

He laughed and hugged me again. “That’s our answer about moving. We’ve been trying to make the decision all by ourselves. God wants us to just let go and follow Him.”

Within the month we were gone, headed to South Carolina. It has been one of the single-best decisions we’ve ever made. That decision caused a domino effect in our lives leading us straight to God, strengthening our faith as well as our family.


Now I find myself at another cross road, with God once again asking me to trade the security of what I know and am comfortable with, for His path, which leads only He knows where.

You might think the choice would be simple this time, but it isn’t. Never the less, I’m determined to trade my control for His. I’ll let you know how it turns out!

But what about you? What part of your life is God trying to get you to relinquish to Him?

I invite you to join me as I let go of the steering wheel.

After all, those who trust in the Lord  will renew their strength;  they will soar on wings like eagles;  they will run and not grow weary;  they will walk and not faint. (Isaiah 40:31)